Despite being an ethnically diverse region, Lubelskie area (Lubelszczyzna) has produced relatively unified and less distinctive instrumental music, dominated by vocal music, especially in the eastern sections, which is typical for lands inhabited by East Slavs.

A folk band in Lubelskie area was made up of a violin and basses, or a violin and a single-skin drum with jingles (or bells). Sometimes both of the instruments providing accompaniment – the basses and the drum – could be part of a band at the same time.

Over time, the basses had been replaced by the double bass, the small drum by a large, double-skin drum with a cymbal, while another violin, the clarinet, and the Polish accordion joined the line-up. The actual composition of a band differed across the region, but also depended on the occasion and the wealth of the people who hired the musicians: sometimes guests had to do with a violin coupled with a small drum, or a violin only (modest events, or even wedding receptions). Earlier, south-eastern sections of Lubelskie Province knew the suka, a vielle whose strings were stopped at the side with the fingernails. After WWII the suka was reconstructed and is played by artists of the folk revival.

Under the influence of military and fire brigade bands, after WWI, and in some parts of the region even earlier, wind orchestras had become popular. Their repertoire embraced traditional folk melodies, as well as military marches, and popular melodies of urban origin. Sometimes the same musicians would perform in a traditional band and a wind orchestra. 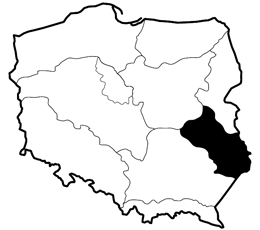 The Band of Bronisław Dudka from Zdziłowice; rec. Andrzej Bieńkowski. Kazimierz 1991; Music Lost & Found
© Narodowy Instytut Muzyki i Tańca
The texts, photos, films, translations and other contents of the site
are protected by copyright laws. Their use or reproduction, even partial, is prohibited without previous approval from the National Institute of Music and Dance.