Kolberg: "The people here seem less inclined to mirth. In their work on the fields, one does not hear the songs and cries that so beautifully enliven the harvest and other agricultural occupations. Despite this, violins and cellos occasionally lure the company to the tavern, and here too, as in Kujawy and Mazovia, a full-blooded mazur sets limbs in nimble motion".

In Pomerania Polish musical folklore was the domain of Cassubians, Slovincians, Borowiacy Tucholscy, and Kociewiacy. The region boasts relatively more purely instrumental melodies than other areas of Poland, e.g. the so-called rheiländlery (or rajlendlery), some polkas and waltzes (also of non-folkloric origin, popular or composed by regional composers), and some dance games. Bands usually included the violin, clarinet (in C), and three-string basses (basy) with differently shaped bodies, called rzępiele. Not infrequently the traditional line-up of the violin and basses was expanded to include the Polish accordion (bandoneon), later replaced by the accordion. More wealthy farmers hired larger bands to play at wedding receptions or feasts. These included two or three violins, two clarinets (in C, E-flat or B-flat), the trumpet (in B-flat), and the Polish accordion. Sometimes they would even hire wind orchestras complemented with the trombone, and different kinds of saxhorns (growing popular from the mid 19th century). Not infrequently traditional and "modernised" bands featured the same musicians. Poorer farmers had to do with smaller bands, or solo musicians (a violinist or accordionist). In more modern times the Polish accordion was replaced by the accordion, and basses were switched for the double bass. Playing the double bass, musicians did not only use the bow but produced sound also by plucking the strings (pizzicato), which is untypical for folk artists. Untypical, too, are plucked string instruments, yet the zither gained certain popularity already in the 19th century in Kashubia. Public performances of today's folk bands feature ritual instruments, such as the devil's fiddle and the burczybas, a friction drum with a cord, sometimes along with signal and shepherd instruments, such as the wooden folk horn bazuna or the ryńczyk. These are not only a regional attraction set to please the audience, but have come to signify the Cassubians' regional identity. The devil's fiddle played the role of a percussion instrument. After Wold War II, West Pomerania also saw the arrival of the hammered dulcimer brought from the Vilnius area by local folk musicians. 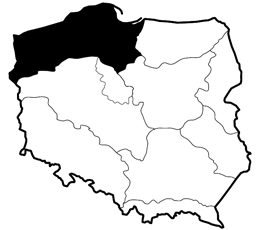 Tadeusz Makowski (b. 1950), devil's fiddle; rec. Jacek Jackowski, Ciechanowiec 2013; ISPAN
© Instytut Muzyki i Tańca
The texts, photos, films, translations and other contents of the site
are protected by copyright laws. Their use or reproduction, even partial, is prohibited without previous approval from the Institute of Music and Dance.