In Lesser Poland (Małopolska) the following subregions have developed the most distinctive folk music: the areas of Opoczno, Kielce, Kraków, Tarnów, and Rzeszów. Instrumental music was of significance there. Up until the end of the 19th century, a traditional band in the areas of Kraków, Tarnów, and Rzeszów would be made up of the violin and small basses. In the area of Kielce the basses were often the furrowed (żłobione) variety, while around Opoczno a band would also include a single-skin drum. The first decades of the 20th century saw the number of violins increasing. The violin section was divided into the first and the second violins. The second unit, called skrzypce sekundujące, or supportive violin, included two or three players. Small basses were replaced with big ones (in most cases the double bass) or the Polish accordion (in the area of Opoczno), and after WWII even the accordion (in the subregion of Kielce). Some bands of the area of Rzeszów replaced the basses with a large double-skin drum. Already before WWI bands operating around Kraków and Tranów, and subsequently also those from the area of Kielce, included the clarinet and trumpet. The same trend might have been observed in the subregion of Rzeszów, with the C clarinet being introduced first, followed by the B clarinet, and the trumpet appearing only occasionally. Later, the subregion saw the rise of bands including double violins and clarinets, as well as the trumpet. Nowadays the line-up also includes the saxophone. These two tendencies: to double instruments and divide them into sections (e.g. first and second violins) contributed to a change in the style of playing – traditional heterophony gave way to homophony. However, more often than not people would sing or dance to the sound of violins only.

In the interwar period, and especially after WWII, bands in the areas of Kraków and Tarnów started to use the Polish accordion, nowadays replaced by the accordion. Also popular to a degree was the helicon accordion. Already in the 1930s, but mainly after WWII, Rzeszów-based bands started to include the hammered dulcimer. The instrument had usually been played by Jewish and Romani musicians before, and was incorporated into Polish traditional bands as a regional instrument as a result of the folkloric revival, and because of purely musical reasons as it fits well in-between the melodic and bass instruments.

Until WWI, in east sections of Lesser Poland one could spot, if rarely, the hurdy-gurdy (lira korbowa), an instrument played in the modern era in Europe and in Poland by wandering musicians performing narrative songs, a rare occurrence in Polish music. Up until WWII hurdy-gurdy players were relatively numerous in Ukraine. Nowadays, the instrument is played by musicians of the folk revival. 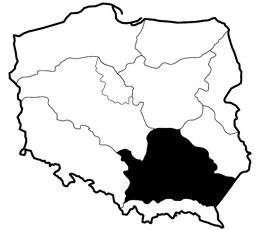 Bride's tune; The Sowa family band from Piątkowa: Wojciech Sowa (1911-1977), violin, Józef Sowa (1903-1978), violin, Józef Sowa (1904-1983), hammered dulcimer, Piotr Sowa (1911-1997), double bass, Jan Krztoń (b. 1937), clarinet in B-flat; rec. Kazimierz 1976; Sources of Polish Folk Music
© Narodowy Instytut Muzyki i Tańca
The texts, photos, films, translations and other contents of the site
are protected by copyright laws. Their use or reproduction, even partial, is prohibited without previous approval from the National Institute of Music and Dance.