Kolberg (1875): "Greater Poland should undoubtedly be regarded as one of the most interesting provinces for the ethnographer, now on account of the purely Western Slavic features of its inhabitants, now on account of its location on the western limits of the present-day Slavic geographical area".

An important role in Greater Poland's (Wielkopolska) folklore was played by instrumental music. Bands in some subregions held on to the old-time ways of joint playing almost to our times. Melody would be based on a continuous or rhythmizised low sound (drone) in the case of bands including bagpipes or basses (playing an open string). Also frequent was heterophony, i.e. different instrumentalists simultaneously performing melodic variants of the same tune. The region's music is characterised by very fast tempo of playing (and singing).

Greater Poland is first and foremost a land of the bagpipe (dudy): as many as 12 kinds and variants of bagpipes may be found there (out of 15 kinds that have survived in Poland to this day). A traditional band in central sections of Greater Poland would be made up of bagpipes and the violin. To match bagpipes' high pitch, folk musicians used the tied violin (skrzypce przewiązane) whose fingerboard is bound at one-third. Thanks to higher tuning and being played an octave higher than bagpipes, the violin produced a sharper sound and made itself heard admid bagpipes' loud music. In north-western sections of Greater Poland folk musicians played the largest types of bagpipes: the kozioł ślubny or kozioł czarny (nuptial or black goat) and the kozioł weselny or kozioł biały (wedding reception goat or white goat). The former was accompanied by the (high-pitched) mazanki, the latter – by the violin, and after World War I also by the E-flat clarinet, while after World War II, for some time, it was played along with the trumpet. In Greater Poland also the least complex type of bagpipes was used: the siesieńki (bladder pipe). Formerly a shepherd instrument, the siesieńki were later used by young boys training to become bagpipers. Wedding goats, mazanki, and siesieńki were becoming rarer and rarer already before WWI. After WWII, thanks to the school of folk music established in Zbąszyń (originally a small learning centre), and efforts of various regionalists, musicians in Greater Poland took up playing the instruments again.

Yet bagpipes were not played across the whole region. In the north, in the area of Szamotuły, a band was composed of the violin, clarinet (in C), and maryna (a double bass that also provided the rhythm). The maryna (Marina) accompanied the violins – sometimes even three of them – also in north-eastern sections of Greater Poland, in Pałuki. Another, older, kind of the double bass was used in south-eastern parts of Greater Poland, in the area of Kalisz, as well as in the vicinity of Wieluń, known as the basy żłobione (furrowed basses, hollowed-out basses), which accompanied the violin with a rhythmizised drone in fifths achieved by playing two strings at a time. A typical Kalisz-based band also used archaic, large furrowed double-skin drums, later replaced by a small single-skin drum. 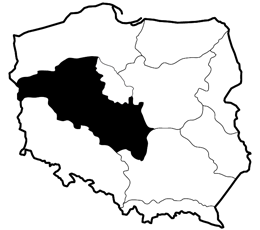 Tomasz Kiciński, bagpipe, Martyna Żurek, tied violin; rec. All the World's Mazurkas, Warsaw 2014; IMIT
© Instytut Muzyki i Tańca
The texts, photos, films, translations and other contents of the site
are protected by copyright laws. Their use or reproduction, even partial, is prohibited without previous approval from the Institute of Music and Dance.