Traditional instrumental bands of Podhale were made up of a violin and small basses still in the mid-19th century, then, between the 1890s and 1930s a second and third violin would be added to the line-up. Sometimes big basses were also used. These days more than three violins are sometimes seen. Already in the second half of the 19th century the violin had been replacing the złóbcoki fiddle, oktawka (also popular among the highlanders of Pieniny), and bagpipes. The famous storyteller of Podhale Jan Krzeptowski Sabała played the złóbcoki, while the best-known bagpiper of Podhale was Stanisław Budz-Lepsiok, aka Mróz (Frost). After WWII the accordion gained some popularity, while the performing style in different parts of Podhale diversified.

Two or three violins and basses is also a characteristic line-up for the bands of Górale Orawscy, Górale Spiscy, Górale Pienińscy, Górale Gorczańscy, Górale Zagórzańscy, or Górale Łąccy. In addition to these instruments, Górale Piwniczańscy made music on the clarinet, while Górale Orawscy, Kliszczacy, Lachy Limanowskie, and Lachy Sądeckie also performed on the trumpet. Nowadays they even play the saxophone. Górale Orawscy would sometimes replace basses with a double-skin drum with a cymbal. Bagpipes were not used anymore.

A traditional band in Beskid Żywiecki and Beskid Śląski was made up of bagpipes and a violin. Sometimes, especially later on, bands would also include a second violin. If that was the case, occasionally bagpipes would be abandoned, while the basses, and even the clarinet, the trumpet, and (rather rarely) a drum would be added. Such bands were more popular in the northern, not mountainous, sections of the Żywiec subregion or in Śląsk Cieszyński. Earlier, one could sometimes encounter a dulcimer player, with some performing as part of a band as well (Beskid Śląski). Very popular was the heligonka accordion, played solo or as part of a band, for example during carnival rituals. Kolendari, or kolędnicy, in the area of Żywiec also performed on the devil's fiddle (here called wakat), as well as the klapper (kołatka), bells, or whips. Also used in the Carpathian region were different types of pipes, with or without finger holes (known as "fast" or "Lent" pipes), including instruments made of two parallel pipes. They were mostly used by shepherds, just as wooden trumpets (trombitas) and horns. In Beskid Żywiecki it was common to use different kinds of calls to emulate the sound of birds (kusoc, kuwiek) and vessel flutes, namely the ocarina (ceramic sulka, or ocarinas made of tree roots, also known as bulkot).

Starting from the second half of the 19th century, in Beskid Śląski (especially in the villages of Brenna and Wisła) very popular were wind orchestras, to the point of displacing traditional bands (made of bagpipes and a violin). Such bands nevertheless survived in the interconnected villages of Istebna, Koniaków, and Jaworzynka.

Thanks to a robust folk revival movement, some abandoned instruments, such as bagpipes, złóbcoki, trombitas, or pipes are played again, if mainly at festivals or other showcases. 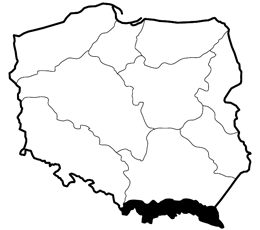 Zbigniew Wałach, viola, Rafał Bałaś, viola; rec. Agata Mierzejewska, Żelazowa Wola 2014; NIFC
© Narodowy Instytut Muzyki i Tańca
The texts, photos, films, translations and other contents of the site
are protected by copyright laws. Their use or reproduction, even partial, is prohibited without previous approval from the National Institute of Music and Dance.