Two regions of different history yet similar folk music. The traditional line-up of a Warmia and Mazury band – consisting of the violin, basses, and single-skin drum – would be expanded and modified already before World War I. The basses were replaced by the double bass, while the clarinet, flute, Polish accordion, and then accordion were added. Growing popular before World War I were also wind orchestras made up of the cornet, trumpet (in C and B-flat), trombone, tuba, different kinds of saxhorns in particular, and a double-skin drum, sometimes accompanied by the clarinet, flute, and double bass. The ensembles would play at a variety of occasions, including wedding receptions at wealthy farmers'. After World War II Varmia and Masuria saw the arrival of dulcimer players from the Vilnius area, who would play solo or together with other instruments (often with the Polish accordion) a repertoire characteristic for minor gentry houses (e.g. quadrilles). At the time, regional bands started to play the devil's fiddle as a regional attraction, sometimes accompanied by the burczybas, which had been a ritual prop used by Kolendari, or kolędnicy, at Christmas and Easter time, just like in Pomerania. In pastures, different types of pipes were used, along with horns rolled out of willow bark or cut out of tree branches, and called the tromba (trumpet) or ligawka. Also popular was the harmonica (used by Kolendari, too). At homes, people played the mandolin, guitar, and zither, i.e. plucked chordophones, untypical for Polish folk music but characteristic of court music and Ukrainian folk music (e.g. the lute, teorban, bagpipes, or bandura). Poland's folk tradition favoured continuous, unbroken sounds produced by string and wind instruments. 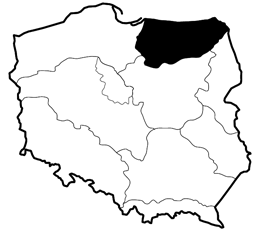 Kowalewski's Polka; Jewish Polka; The Racis Brothers' Band from Jasionów (Suwałki area): Franciszek Racis (b. 1924), violin, Sylwester Jaśkiewicz (b. 1933), violin, Leon Racis (b. 1926), drum; rec. Kazimierz 1990; Sources of Polish Folk Music
© Narodowy Instytut Muzyki i Tańca
The texts, photos, films, translations and other contents of the site
are protected by copyright laws. Their use or reproduction, even partial, is prohibited without previous approval from the National Institute of Music and Dance.