Kolberg (1886): "Mazovia, like nearly all our provinces, abounding in melodious songs and dances, possesses among them a great multitude of those which, marked by their characteristic Mazovian rhythm (familiar and visible in the mazur dance), reveal a people of an impetuous disposition, full of life and energy, even prone to quarrel, yet despite that, in particular circumstances of social life, not devoid of mild and tender features; that is, attributes that are ascribed to the Slavic race in general".

Looking at the musical folklore of the region of Mazovia (Mazowsze), one can distinguish the following subregions: Kurpie, Mazowsze Płockie, Mazowsze Łowickie, Mazowsze Skierniewickie, Mazowsze Rawskie, and Mazowsze Polne (Południowe). Mazovia's folk instrumentalists did not adhere to one standard of performing as regards melody and rhythm. Typically they preferred tempo rubato, which was connected with mazurka rhythms, and provided the player with a chance to freely distribute dynamic accents (although mainly on weak parts of the bar). They would play very fast (200 MM on average), which resulted, particularly in the case of the oberek, in ornaments being replaced by repetitions of melodic figurations. In practice, a few dance melodies were combined to form one series. Dominating in the region was instrumental music, only in Kurpie, in the north-east, singing played the leading role.

A folk band was composed of the violin and a small, single-skin drum (Mazowsze Skierniewickie, Mazowsze Rawskie, Mazowsze Polne, Kurpie and also belonging to Lesser Poland Radomskie) or a large, double-skin drum with a triangle or cymbal (especially in Mazowsze Płockie or Łowickie). The line-up was expanded to include the basses (Mazowsze Rawskie, Mazowsze Skierniewickie, earlier Kurpie as well), and the clarinet (Mazowsze Łowickie and Polne). In early 20th century, especially after World War I, band line-ups began to include the Polish accordion, sometimes it being the pedal version (in particular, east of the Vistula). The craft of making the instrument's different models developed especially in Warsaw, first satisfying the demand from urban musicians, and subsequently rural ones, too. The Polish accordion offered new possibilities: it introduced a new sound to folk music, filling up, like the hammered dulcimer (especially in the Rzeszów area), the space between melodic and bass parts. The Polish accordion was costly, yet it also enabled musicians to earn more, and achieve a higher professional standing.

An ancient custom was for shepherds, and hunters and lightermen (flisacy) in Kurpie, to use wooden horns and trumpets (called ligawki, among other names); a newer one (emerging in the 19th century) saw men blowing the instruments during the Advent (in the mornings and evenings, in front of churches or on the outskirts of villages), as well as before the Christmas Midnight Mass before the church entrance. Also popular was playing different pipes, in particular ones rolled out of willow bark in the spring (in particular in Mazowsze Polne). In Kurpie, Christmas, carnival, and Easter Kolendari, or kolędnicy, used the devil's fiddle while doing their rounds. 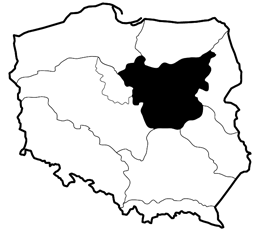 A Wedding Oberek; The Stanisław Klejnas Band from Raducz: Stanisław Klejnas, violin, Irena Janicka (b. 1957), double bass, Wiesław Pęzik (b. 1957), drum; Sources of Polish Folk Music
© Narodowy Instytut Muzyki i Tańca
The texts, photos, films, translations and other contents of the site
are protected by copyright laws. Their use or reproduction, even partial, is prohibited without previous approval from the National Institute of Music and Dance.